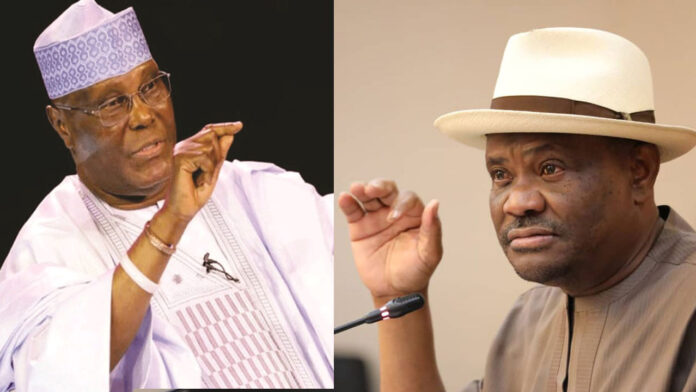 The Peoples Democratic Party presidential candidate, Atiku Abubakar, has set up a committee to beg Rivers State Governor, Nyesom Wike and some other aggrieved members of the party.

This follows the outcome of the PDP primaries across the nation, IDOMA VOICE reports.
Wike had contested for the PDP presidential ticket but lost to Atiku in a controversial way.

Following his defeat, people had expected that Atiku would settle for Wike as his running mate, rather, the former picked Ifeanyi Okowa.

The development angered Wike and his supporters, who allegedly threatened to dump the party.

Sequel to the ominous signs in the party, Atiku was said to have constituted a team to appease and fully bring back Wike into his campaign council, ahead of the 2023 general elections.

Speaking on condition of anonymity, a PDP chieftain who was privy to the decision, said, “ Atiku wanted to tell Wike about his choice of Okowa one-on-one but then, he heard that Wike had returned to Rivers. That clearly showed good faith. Even though Wike was not the selected candidate, Atiku wanted to accord him respect by letting him know before the news got to the public.

“Atiku has set up a reconciliatory committee to reach out to Wike and mend the cracks. Atiku understands the need to go to the 2023 elections with a united front. Everyone will be pacified. Not only Wike but every aggrieved person within the party.”

Corroborating the development, a top Atiku confidant told Punch, “Our people (PDP members) are still aggrieved and when you are doing mediation, you don’t give the impression that you are not sincere but it is a serious undertaking.“His Excellency, Governor Wike is strategic to Atiku’s victory, make no mistake about it. Whatever anybody may say, that is a party man through and through. He understands the times we are in and that was why he threw his hat in the ring; that is why he wants to be president because he feels that he has what it takes to lead the country so also the other candidates who contested.

“Now, that the contest is over, we really have a responsibility to bring everybody together. You don’t go to a battle with a disunited army. Wike is the kind of man you can go to battle with, you don’t leave him behind. You do all you can to bring him on board. The enemy is not within PDP; the enemies are those who have enslaved us; people that have impoverished us.”