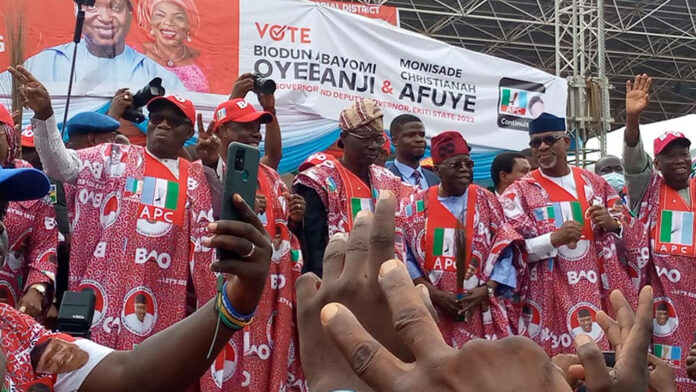 Supporters and stalwarts of the All Progressives Congress were treated to a hilarious session when the Governor of Ekiti State, Kayode Fayemi, officially referred to Governor Dapo Abiodun as the ‘Eleyi of Ogun State.’

This was even as the party’s presidential flagbearer, Asiwaju Bola Tinubu, labelled Oyebanji as the ‘Emi Lokan of Ekiti’ who would perform beyond the expectation of his people.

The banter took place at a political rally where the Ekiti governorship candidate of the APC, Biodun Oyebanji, was unveiled to the electorate ahead of the June 18 election.

After Fayemi’s hilarious jab, Abiodun was seen giggling as party leaders patted him on the back in a jovial manner.